Sparkling potatoes in a Dutch oven are a camping classic, and I have many memories of having them during our camping excursions growing up. Or at Scouting events. We hardly go camping anymore, but it’s still fun to make these potatoes at home in the oven. Whether you’re having a “camping at home” night with s’mores or a Dutch oven night, they’re lots of fun. They do tend to be a bit greasy with all the cheese and bacon, so you may want to serve this with a less greasy main course or a nice fresh salad. The picture didn’t get the best melt on the cheese, but it generally turns out pretty smooth and nice.

We’ve also made sparkling potatoes with leftover New Year’s ham instead of bacon. It’s pretty good and very similar to the regular kind, but bacon does make it better.

And of course this one is naturally gluten free. 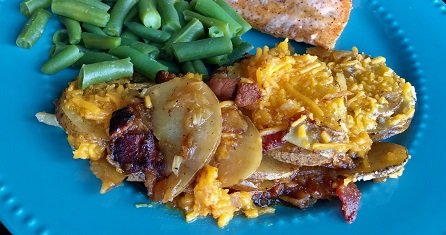 It takes a bit of time and it’s fairly greasy, but it’s delicious.

Fry bacon and onions in bottom of pot. (If you want it less greasy, you can remove some bacon grease.) In same pot, add potatoes, salt, and pepper. Pour in Sprite. Sprinkle on a thick layer of cheese. Bake at 375° for about 1 hour or until potatoes are tender and cheese starts to brown.

(To save time, lately I’ve been cooking everything in a big ovenproof skillet beforehand to get the potatoes mostly done before putting it in the oven. Then I just pour in the Sprite and top with cheese, and basically cook until the cheese is melted and starting to brown a little.)

For cooking with charcoal: Dutchovendude.com says for a 12″ Dutch oven to be at 375, place 20 coals on the lid and 6 under the oven. Don’t forget to rotate the oven every 10  minutes or so 1/4 turn.

View all posts by mitchellmeals